How to Train Your Dog to Jump Over People

Want to learn how to train your dog to jump over people?

It’s not as hard as it sounds!

Your dog will be impressing your friends with his skills in no time!

How to Train Your Dog to Jump Over People

Training your dog to jump over people is a great way to give your dog a good workout and cement the bond between you.

Once he masters this, you’ll have no trouble teaching your dog how to jump rope, run agility courses, and do other advanced tricks!

1. Wait until the right time

Before you can teach your dog to jump over people, you’ll need to make sure he understands basic commands.

As the saying goes, you have to know how to walk before you can run.

The same rule applies for dog training. He has to at least be able to sit and stay before he can jump.

Timing isn’t just about waiting until he has a firm grasp on essential commands, though.

It’s also about waiting until he’s old enough and his growth plates close. If you start too early, you can do serious long-term damage to your dog’s bones and spine.

For most breeds, it’s best to wait until around their first birthday.

However, some giant breeds continue growing until well into their second year.  When in doubt, talk to your vet. 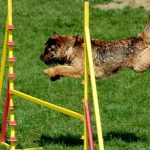 How To Teach Your Dog To Jump Over Hurdles (With Videos)

If you want to train your dog to jump over people (or do any trick, for that matter), you’ll need the right motivator.

The more complicated the trick, the more motivation he’ll need. Skip the treats that he gets every day and grab the really high-value goodies.

Small chunks of cooked chicken, cheese, or other things that he loves but rarely gets work best.

The important word there is “small,” as you don’t want to overfeed him.

Not only will you end up with an overweight dog, but do you really want to take a chance on having a “stuffed to the point of sickness” pup when he’s leaping over your best friend?

3. Teach him the “jump” command

Obviously, your dog needs to know what “jump” means before you can ask him to leap over your back.

Fortunately, it’s a fairly easy trick to teach and master.

4. Move on to jumping over obstacles

Once your dog masters the art of the basic jump, it’ll be tempting to move right on to training him to leap over people.

Not so fast, though!

First, he has to grasp the idea of jumping over objects. Again, you’ll start with baby steps first.

Grab a stick (a broom handle will do) and set it on the ground. Tempt your dog to step over it by holding a treat on the other side.

He’ll have to cross over the stick to get to it. Once he’s got that down pat, lift it off the ground a few inches and repeat.

Just like with regular jumping, you’ll slowly increase the height until he’s actually leaping over the stick to reach his tasty prize.

5. Replace the stick with a person

Now comes the hard part, training your dog to jump over people. Enlist a friend to help you out with this step.

Unless you’re a contortionist it’s kind of difficult to do on your own.

Ask your friend to get close to the ground, either by lying flat or on his hands and knees, depending on your dog’s size and jump range.

Follow the same basic method for getting your dog to leap over a stick.

Position your dog on one side of your friend, hold a treat on the other and give the “jump” command.

Reward him for even the smallest effort, as leaping over people is a lot more foreign than jumping over objects.

It may take a bit more patience than other tricks, but before you know it, he’ll be a pro!

If you do run into snags at any point, read on for a few tips that’ll make the process go a lot smoother.

Whether you’re trying to train your dog to jump over people or just do something simple like shake hands, make sure you keep your sessions short and sweet.

Dogs tend to lose interest after about 20 minutes. Training shouldn’t feel like a chore for either you or your dog.

Use the right command

Although “jump” is the most logical command, you can use anything you want. Heck, you can even use “Steve” as your command!

The key is to choose one and stick with it. It’s also a good idea to pick a word that isn’t a part of other commands.

If you taught your dog “no jump,” don’t use “jump.” It’ll confuse him.

Keep using the stick during step 5

Is your dog looking at you like you’ve lost your mind when you try to get him to jump over your friend?

As Doggie Buddy recommends, just bring the stick back.

Just place it on your friends back and watch understanding dawn on Fido’s face.

Once he figures out what you’re asking of him, you can lose the stick again.

Remember, jumping over people isn’t exactly something that your dog would naturally do on his own.

In other words, he doesn’t wake up one morning and think, “Gee, it would be fun to leap over Joe!”

While the same could be said for most tricks, the more unnatural the request, the more apprehensive your dog will be.

If he’s absolutely terrified, let it go. There are plenty of other tricks to work on together.

There you go! A simple step-by-step guide for how to train your dog to jump over people.

Make sure you come back and tell us how it worked!

Did you train your dog to jump over people? Share any other tips you have with us below!