Proven Strategies for How to Train a Yorkie Not to Bark

. If you own a Yorkshire Terrier, chances are you’ve Googled how to train a Yorkie not to bark more than once.

Yorkies are great little dogs, but their body and their personality don’t match!

Their excessive barking is louder than you might think!

Read on for tips on how to get your sweet pup to stop barking so much. 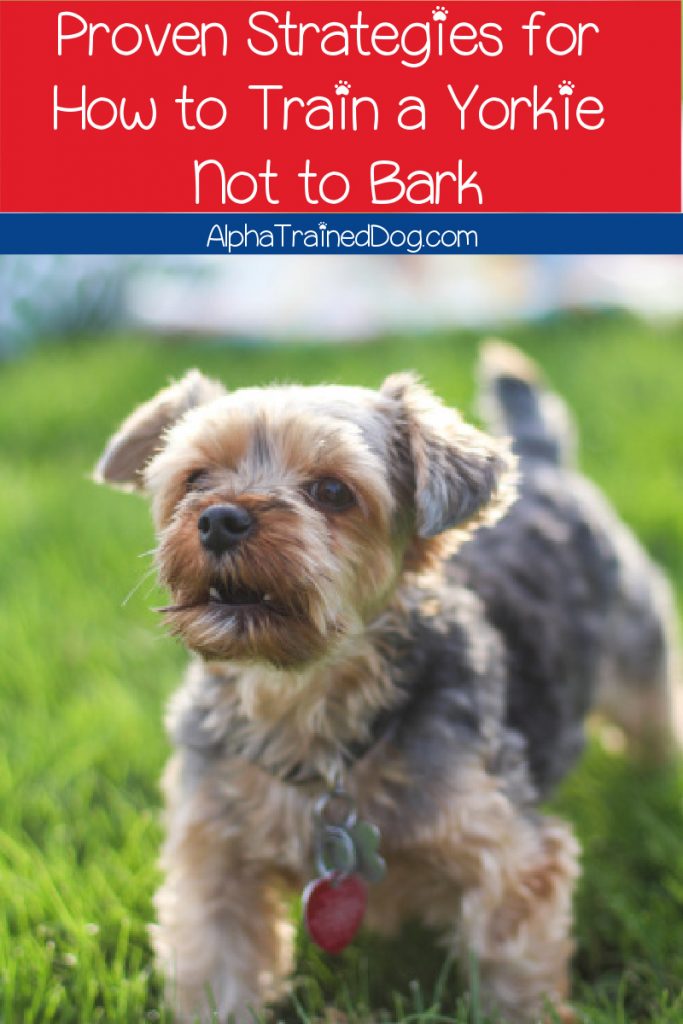 How to Train a Yorkie Not to Bark

If you’re planning to get a Yorkie, asking the question now rather than later was an excellent choice.

Yorkie is short for Yorkshire Terrier, and these bold little spitfires live up to their terrier heritage.

Because of this, you’ll want to know how to train a Yorkie not to bark incessantly because they can be quite vocal.

Why Do Yorkies Bark So Much?

Yorkies are terriers, and as such, they can be hard-headed. They’re also energetic and extremely feisty.

This little breed definitely has far more personality than you would think his small frame could hold, and that comes through in their vocalization.

Yorkies make excellent watchdogs due to the vigilant protectiveness of their home and families.

This vigilance, however, can translate to being overly aggressive at times, and extremely yappy.

Coupled with that is the fact that Yorkies aren’t shy about trying to get your attention for playtime, treats, or anything else they see with a flurry of high-pitched barking.

Combine those and you have a recipe for a very impressive full-time bark machine if you’re not careful.

Yorkie puppies bark for similar reasons to adults – similar, but not the same. An adult Yorkie usually barks constantly to get his way.

A Yorkie puppy barks for much the same reason that other puppies bark, they want attention, reassurance, or to play.

Young puppies, especially breeds that are naturally vocal as Yorkies are, will bark to get attention because they’re lonely or bored. 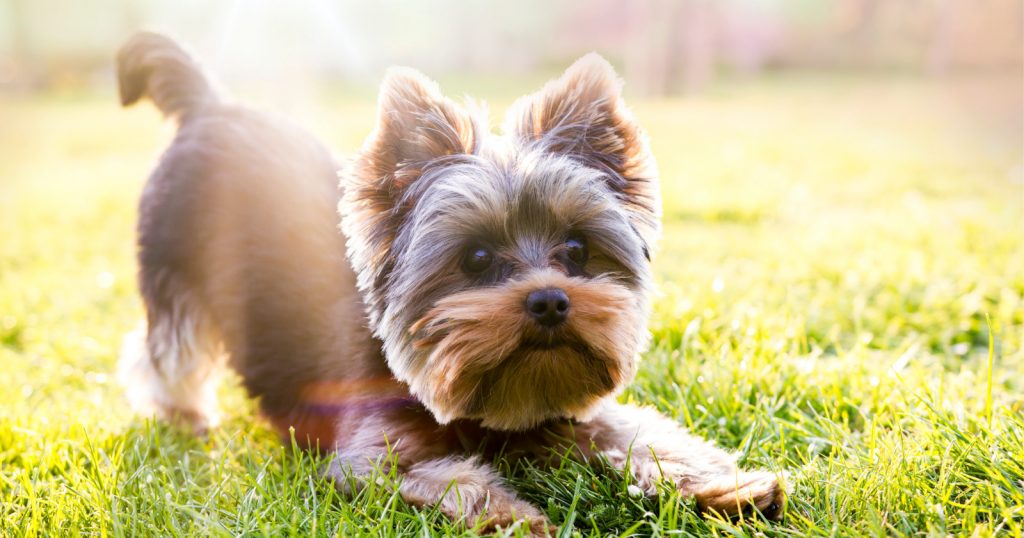 How to Train a Yorkie not to Bark by Scenario

We’re going to take a look at a few different scenarios that highlight some of the common reasons that Yorkies bark and how to correct them.

Barking to Get Their Way

Here’s a perfect example of an owner with a Yorkie that won’t stop barking. On Reddit, Froggyleggs said:

My dog, Pippin, has a super high-pitched bark, and most of the time, she is barking at me for a purpose, and when I figure out the purpose she is fine, but then there are some times she just barks at me and wants nothing and also there are times she barks for like a treat but she just has one so I don’t want t give her another one just to get her to stop barking. Does anyone have any solutions on how I can train her to stop barking when I tell her too?

If you immediately said the owner is training their dog to bark, you just won the prize.

There’s no actual prize, but you got it right. Yorkies are both demanding AND smart.

In this case, the owner’s dog, Pippin, learned quite quickly that if she barked, she would get what she wanted.

The only mystery in this scenario is when Pippin barks for no apparent reason, seeming to want nothing.

However, what she wanted was attention, and she got it when her owner acknowledged her.

So how do you stop your dog from being so demanding and barking all the time?

Thankfully, the answer is incredibly simple and easy to implement.

You just ignore your little bark machine. It really is that easy.

In Pippin’s case, she learned that barking got her whatever she wanted, whenever she wanted it. In this scenario, the owner simply needs to stop reacting to the barking.

This is especially important for new owners dealing with Yorkie puppy barking.

At that early age, the puppy is trying to figure out his place in the pecking order of the home.

With such an aggressive little personality, it can be all too easy for owners to accidentally teach their puppy that barking gets him everything he wants.

Ignore the barking, and it will stop. Yorkies that bark to get what they want are doing for that sole purpose.

So don’t give them what they want. Rather, wait for them to stop barking and then reward them. T

his is a smart breed, and soon enough, your little guy will realize that the way to what he wants is through silence not barking.

Barking for Attention or Affection

Barking for attention or affection is another common behavior with Yorkies.

Yorkies have a personality that says, “You WILL love me, human,” and it’s said through barking. Take a look at this question from Reddit user, COoL_COoKiE:

He doesn’t stop barking when I leave the room and leave him in there. If I leave the house and go somewhere, he doesn’t exhibit the same behavior. But, if I’m home whether I’m out on the patio or upstairs with my parents, he incessantly barks. Is this separation anxiety? Is it something else? Is there even a solution? Sometimes I think it’s because he knows I’m still home and wants to be with me which is why he won’t do it when I’m not home.

In this case, the owner is wondering if the dog has separation anxiety, but that’s not the issue.

The dog would not be calm when his owner left the home if that was the case. In this instance, the dog just wants attention, and he will. Not. Be. Ignored.

So how do we stop this kind of behavior? It’s actually the exact method used above for a Yorkie barking to get his way.

Just ignore it – but with a twist. In addition to ignoring the behavior, the little guy will also have to be trained out of it in another way.

The owner should wait until his dog stops barking, then enter the room. If his dog begins to bark at any point while he’s opening the door, he should immediately close it again.

The idea here is that the dog should never feel rewarded in any way by his parking. Severing the connection between barking and his owner coming into the room is key.

Repeating the process of waiting to enter the room until barking stops, immediately closing the door if the dog begins to bark again should be repeated until the dog stops barking for his owner to come.

When that happens, the owner then rewards his dog with lots of praise and a treat when he enters the room and his dog doesn’t bark.

Being Overly Territorial and/or Protective

Our last example covers one of the classic problems owners can experience with their Yorkie – being overly territorial or protective.

Yorkies have the perfect storm of fearlessness, protectiveness, and big personalities all wrapped up into a small little body that will absolutely write checks their bodies can’t cash.

Reddit user, AnAmbulanceChaser has a classic example of a Yorkie who has a severe case of being overly aggressive:

This user describes their dog as being “sweet, loving, and caring” inside the house, but outside of the house, the dog becomes extremely aggressive.

The 3-year-old Yorkie barks at everything and everyone while on a leash, in a car, or looking out the window of the home. in addition, the dog nips at strangers who enter the home.

The dog has even bitten his owner when the owner tried to pick him up if he was barking at something.

in this case, the Yorkie’s protective instincts are in overdrive. This little guy sees himself as the He-Man protector of the family, and he will stop anyone or anything that gets in the way of that goal – even his owner.

Yorkies aren’t a naturally overly aggressive breed, but this is a common issue with this breed if they haven’t been socialized and/or trained properly. 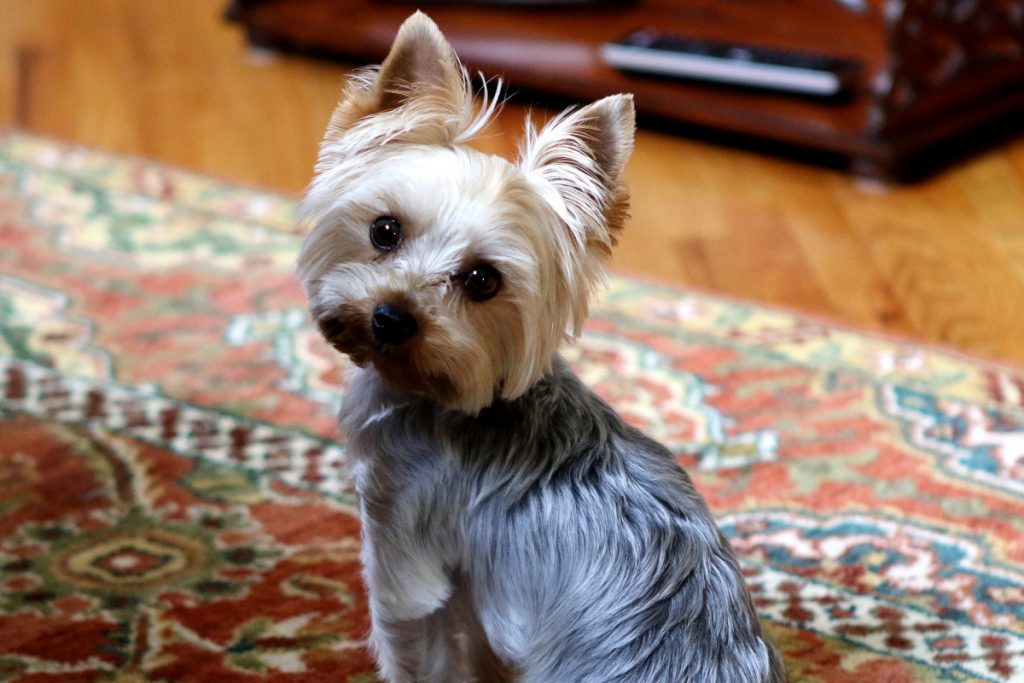 The best way to stop this particular kind of behavior is to never let it start, so we’ll start there.

Be sure you socialize your Yorkie puppy early and thoroughly. Bring him with you to any place that accepts pets from your local pet store to the dog park.

Take him on walks in populated areas. Schedule play dates with other dogs. Introduce him to cats and other pets if you can.

However, if your Yorkie is already set in his overprotective ways, you can still help him chill out.

The best way to train your little guy out of his aggressive behavior is to desensitize him to the stimulus.

In many cases, dogs like Yorkies become aggressive because they haven’t been properly socialized, so the best thing you can do is get him used to other people and animals.

To begin, find some friends or family who are willing to help you and have them walk by you while your dog is on the leash.

Begin here because it’s easier to control him than if you’re in the house where he’s free to run around and get even more amped up. No treats are required for this step.

Simply redirect your dog with the leash when he lunges.  Try this in the car, as well, if your Yorkie is defensive while in the vehicle.

Keep a firm grip on his harness or collar to keep him from escaping and then have people walk around the car calmly as if they’re on their way to another area.

In both of these scenarios, the idea is to introduce your dog to the idea that he doesn’t need to protect you from everything. Here’s an excellent video of this method in action.

To further reinforce good behavior, bring treats with you on your walk, so you can reward him in the early stages when he stops lunging at people or other animals.

When You Know How to Train a Yorkie not to Bark, It Becomes Very Easy

Any form of training can often seem mystifying to an owner, especially a first-time owner, but there’s good news if you want to know how to train a Yorkie not to bark, and it’s this- Yorkies are smart!

In any of the scenarios above, the bulk of the training is simply ignoring the behavior and desensitizing your Yorkie to his triggers. It’s actually very straightforward and easy to do.

Do you have any other tips on how to train a Yorkie not to bark? Share below!