Can You Train a Yorkie to Use a Litter Box?

Can you train a Yorkie to use a litter box?

Short answer, yes, but it’s going to take a lot more patience than training a cat to use one!

Read on to learn the pros and cons of of litter training.

Then, get tips on how to get your Yorkie to use one!

You may also like: 7 Tips on Dealing with Yorkie Potty Training Regression

Can You Train a Yorkie to Use a Litter Box?

Litter box training is an often searched term and post conversation in many dog forums.

This is especially true when it comes to owners of small dogs like Yorkies, Maltese, Shih-Tzus, and the like.

Although most people think of cats when they think of litter boxes, the fact is that dogs can be trained to use them. They even make special litter for dogs.

Litter box training is especially convenient when you have a small breed dog because their waste is so small. 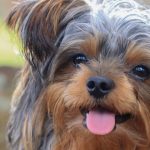 As with all things, it’s important to look at the pros and cons of litter box training before making a decision.

While you might immediately see some pros to this idea, you probably also see some negatives.

The simple fact is that there are good and bad things about litter boxes for dogs, depending on your outlook, lifestyle, and the size of your dog.

So let’s take a look at them.

With traditional potty training, you have to make sure you get your dog out of the house to do his business.

It’s important to stay on a schedule.

If you’re stuck in traffic or otherwise detained, and your dog has to go, he has no choice but to do it in the house.

Normally that would cause a huge mess, but if you have a litter box, your dog has a space to do his business anytime he wants without wrecking your floors or carpeting.

Litter box training itself isn’t that hard to do, and it makes life a lot easier.

In addition to helping eliminate the threat of messes and odors from accidents, litter boxes and litter for dogs is easy to find.

You can go to any local pet store or online to find a variety of litter from basic clumping clay to activated charcoal, paper pellets, and more.

Simply scoop up the mess after your dog goes, and that’s it.

Some small breeds seem to have an almost inability to fully adapt to the idea of going potty outside.

In fact, certain breeds like the Maltese are notorious for continuing to make messes in the home no matter how vigilantly an owner is in their training.

This is usually related to their bladder size and metabolism rather than intelligence, but in any event, it can be harder for small breeds to master outdoor potty training.

Litter box training is far more accessible to these little guys, giving them the option to go whenever the urge pops up.

While some of these are actual drawbacks, some of more like points to remember when deciding if this type of training will work for you and your dog.

Only Viable with Small Breeds

Although litter box training in and of itself can be done with any size dog, it’s only viable with small breeds.

The trays simply aren’t big enough to accommodate dogs larger than around 20 pounds.

Even the best litter is designed with small amounts of waste in mind. Small dogs mean small waste.

Big dogs mean big waste, and that extra amount overwhelms the litter’s ability to do its job.

Some Dogs Dig in the Litter

If your dog is a digger, litter box training probably won’t be an option for you.

For a digger, a littler box is like a sandbox.

There’s so much digging fun to be had for your dog, and so much cleanup for you later on.

Some Dogs Eat the Litter (or the Waste)

Some dogs like to eat their litter, especially pelleted paper litter.

This is exceedingly dangerous because the little will expand in their stomach and lower GI tract, which could cause blockages.

In addition, some dogs eat their waste. A little box offers plenty of freedom for them to have a disgusting snack when you aren’t looking.

Litter boxes for cats aren’t all that stinky if they’re properly managed because cats produce a small amount of waste.

However, even small dogs produce more waste than cats.

This extra waste can produce lots of odors if the box isn’t managed properly, and sometimes, even if it is managed well.

It’s best to do your litter box training and set up in a garage, utility room, or bathroom with available venting.

This isn’t so much of a con as it is a cautionary statement. Male dogs often lift their legs when they urinate.

Without a high-sided litter box, your dog can go in exactly the right spot and still make a huge mess all over the floor.

Although you SHOULD clean your cat’s litter box daily or even more frequently, you don’t have to.

With a dog, daily cleaning is the minimum requirement, and you should really clean it after every use.

This helps control odors and also makes it more likely that your dog will use it. Most dogs won’t use a litter box that has waste products already in it.

Why don’t dogs use litter boxes?

You might wonder why dogs require litter box training while cats will simply do it on their own. It’s because of their instincts.

Litter boxes offer them the option to immediately do what their instincts tell them to do.

Meanwhile, dogs have no such instinct, in fact, their instinct is to get their urine all over anything that they view as theirs.

Marking territory is an essential part of a dog’s instinctive drive, so even though you’re training him to a litter box, you’re still essentially asking him to do something unnatural – just like with training him to go outside

That doesn’t mean he can’t do it. In fact, any dog can be taught to go potty in a litter box.

Of course, it’s easier when he’s a puppy, but older dogs can be taught, as well.

The easiest thing about litter box training a puppy is that you can simply deposit him in the littler box when he wakes up, after he eats or drinks, after he naps, or any time he gets a little too “sniffy”.

Puppies simply go whenever they have to, so they will absolutely use a litter box.

Older dogs require an approach similar to what’s used to get them to go potty outside. It can still be done, it’s just not as easy.

Just like training your puppy to go potty outside, training him to a litter box takes constant supervision and vigilance.

However, it’s made a bit easier by the fact that you can simply carry him to the box quickly whenever you feel he might need to go.

Let’s learn how to litter train a dog.

As with any training, consistency is key. Give your puppy every opportunity to go potty in the desired location.

Take him to the litter box immediately upon waking up in the morning or after a nap, after he eats or drinks, or any time he begins to sniff.

In addition, even if he doesn’t seem to need to go, take him to the litter box at least every hour to two hours.

Each time you put your puppy in the litter box give a “go potty” command. He’ll begin to associate the box with this command.

Praise and treats are of the utmost importance when it comes to any form of training.

If your puppy has an accident, don’t yell or scold, Instead calmly clean it up with no emotional response whatsoever.

However, when he goes in his litter box, reward him liberally with a small treat and tons and tons of affection.

Refrain from making treats the primary reward, or your pup will have you at the litter box every time you turn around.

Continue to take your puppy to the litter box after sleeping, naps, meals and drinking water, and every two hours, as well.

Remember to have patience. Some pups get the idea almost immediately, while others can take up to a couple of weeks to fully master litter box training.

By the way, these tips are the same for how to litter box train a dog who is older.

You’ll just need even more patience because your dog is already used to going outside.

In fact, it can be a big help in many situations where your schedule might not match up with your dog’s bladder.

Just as with outdoor potty training, remember to practice patience, consistency, and praise when litter box training your little guy, and he’ll get the idea relatively quickly.

What do you think about our answer to “can you train a Yorkie to use a litter box”? Have you tried it? Share below!