6 Secrets to Training a Pitbull Puppy Not to Bite

Are you looking for tips on how to train a pitbull puppy not to bite?

While all puppies bite, but it’s not a habit that you would want your Pitbull to carry into adulthood.

Fortunately, I’ve got 7 amazing Pitbull puppy training secrets and tips to help you.

How to Train a Pitbull Puppy Not to Bite

A lot of people have the wrong impression about Pitbulls and consider them an aggressive dog breed. Nothing could be further from the truth.

Pitbulls are quite affectionate and make poor watchdogs because they’re eager to greet strangers with a wagging tail.

Moreover, they get on well with children and are very protective of them.

However, Pitbulls can be quite mouthy at times and love to nip, bite, and chew when they’re young.

They also can be quite protective of their families and aggressive to other dogs.

As such, you have to know how to train your Pitbull puppy not to bite or you might get into trouble with other dog owners, or people suspicious of pits.

Whenever a Pitbull puppy bites a littermate too hard, the other puppy yelps and moves away.

The mother also walks away whenever her puppies nurse roughly. In this way, Pitbull puppies learn to control the strength of their bite.

So, an excellent way to train your Pitbull puppy not to bite is to ignore them when they misbehave.

When your Pitbull puppy bites, move away from the puppy and stop playing with them.

For a few minutes, pay no attention to your puppy. Don’t look at them and don’t talk to them.

Once you notice that your Pitbull understands that biting equals no fun, you can start interacting again with them.

Repeat this exercise whenever your Pitbull puppy attempts to nip or bite you. It doesn’t matter if they do it gently.

You want them to know that being mouthy is going to result in loss of fun.

Keep in mind that your yelping might excite some Pitbull puppies and result in rough play.

If that’s the case, you should walk away from your puppy whenever they start nipping or put them in a crate until they calm down.

All puppies tend to bites more when they’re teething, and most consider your fingers/toes a suitable chew toy.

You don’t want this to turn into a habit.

So, how to survive the teething stage and stop a teething Pitbull puppy from biting?

The easiest way is to get some proper chewing toys.

Since Pitbulls are heavy chewers, you need sturdy, durable toys to satisfy their teething needs. Rope toys, for example, are perfect.

Whenever you noticed that your Pitbull puppy is about to nip or bite, you substitute your hands and fingers with a toy.

This strategy will teach your Pitbull puppy what they’re allowed to chew and what not.

You’d also want to have some frozen treats prepared so that you can give them to your puppy when the teething pain gets bad.

Can you imagine how you’d feel if you’re coop at home with no Internet, TV, or books to read?

You’d go crazy from boredom. Well, some Pitbull puppies do the same when you leave them alone with nothing to do.

As a whole, Pitbulls are energetic dogs, and they require a lot of physical and mental stimulation.

Otherwise, your Pitbull might get overly excited when you play with them and bite.

So, make sure that you take your Pitbull puppy for a walk to get them tired.

Going to the dog park is also an excellent idea to socialize your Pitbull puppy and burn off excess energy.

In addition to this, get toys to keep your Pitbull puppy company when you’re off at work.

There are plenty of interactive ones that can stimulate your puppy, both physically and mentally.

While Pitbulls aren’t the worst dog breed to train, they can be stubborn and bossy at times.

They’re highly intelligent dogs that respond well to positive reinforcement, but they have an independent spirit.

As such, you should start training your Pitbull puppy as soon as possible.

It will help you make your Pitbull puppy stop biting when they get overly excited or act out of fear.

Obedience is twice as important when it comes to Pitbulls due to their bad rep, and you have to take it seriously.

An owner who can’t control their Pitbull might get into trouble with the law. 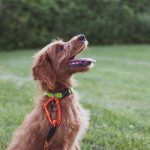 A lot of people think that it’s not a big deal when a puppy nips or bites their hands.

While puppies can’t do much damage with their tiny teeth, you’re setting a precedent.

Your Pitbull will consider your hands an appropriate chew toy and will continue to do it when they’re adults.

They’re going to grow out of it and can cause quite the damage with their strong, angular jaws.

So, to make your Pitbull puppy stop biting, you have to be consistent.

Don’t allow your puppy to nip you because they look cute, or you think you’re going to hurt their feelings. Set your rules and stick to them.

Yelling, shouting, or striking your puppy is not the way to make your Pitbull puppy stop biting.

Despite their muscular appearance and fierce temperament, Pitbulls are a sensitive dog breed and take every failure to heart.

Punishing your Pitbull puppy will only make them shy, reserved, and timid.

These aren’t qualities you want in an adult Pitbull because lack of confidence or fear is likely to make your Pitbull puppy aggressive when they grow up.

Instead, make sure that you encourage behavior that you want your Pitbull to repeat and ignore or redirect a bad one.

Knowing when to reward or reprimand is an important quality of a good owner.

Pitbulls don’t have “locking jaws,” no matter what some people say.

However, Pitbulls have a powerful bite, and badly trained/socialized ones can do a lot of damage when provoked.

That’s why it’s important to teach your Pitbull puppy to stop biting when they’re young.

What do you think about these 7 tips on how to train a Pitbull puppy not to bite? How did you teach your Pitbull to spot biting? Tell us in the comments.