How to Get a German Shepherd to Stop Biting While Teething

How do you get a German Shepherd to stop biting while teething?

Today, we’ll find out why Shepherds are such “bitey” dogs and how to teach your pup to knock it off already.

Let’s get started, shall we?

Related: How to crate train a german shepherd puppy

Why do German Shepherd Puppies Bite So Much?

Before we get to the how, we need to look at the why! So, let’s talk about why your German Shepherd puppy bites so much!

Don’t worry, it’s not because he’s a vicious dog! Far from it, actually!

As a former GSD owner (my girl passed three years ago at age 14), I know from personal experience how frustrating that puppy biting stage is.

Tasha was the most well-behaved dog on the planet but during her early days I practically needed full body armor to avoid those sharp little teeth!

So, what is up with all that biting? Let’s look at why puppies in general bite, as well as why the GSD has such a rep for being a land shark!

Related: how to train an aggressive german shepherd

You know how babies put literally everything in their mouths as a way to explore their new world? Well, puppies do the same thing!

They basically pick up every object they see and think, “Food? No, not food. Fun to chew? Yes! Fun to chew!”

When you’re playing with your puppy and he bites you, he’s not being aggressive, he just hasn’t learned how to play nicely yet.

If you’ve ever watched two puppies play, you’ll notice that they bite each other like crazy, yet (in most cases) no one walks away bleeding.

That’s because they know just how hard to bite each other and still keep it fun. In other words, they’ve learned bite inhibition.

For the most part, puppies learn this before they even come to your home, courtesy of their litter mates.

The problem? Even if you pup spent time with his siblings, their bite tolerance levels are likely a lot higher than yours.

So basically, your puppy thinks he’s biting at an acceptable level when he’s playing with you.

You’ll need to either teach him your own “bite tolerance” levels OR teach him not to bite you at all.

While you’d think the latter is the smarter way to go, the former actually works better in the long run. We’ll see why later on.

Here’s one that doesn’t require much explanation: teething hurts, plain and simple.

Gnawing on your soft supple flesh helps alleviate a smidge of that pain!

If you want it to stop, you’ll need to find another way to soothe your puppy’s pain! Don’t worry, we’ll talk about that more below, too.

Now we get to one of the reasons that’s more specific to the German Shepherd and other herding breeds.

If you’ve ever seen a cattle dog in action, you’ll notice that he nips at his herd to get them to do what he wants.

He doesn’t bite them hard, just a nip to say, “Hey, you’re not supposed to go that way!”

At home, your family is his herd. He feels like it is his instinctual job to keep you all corralled in your proper locations.

There are some misconceptions around herding behavior, so let’s dig a little deeper here.

I recently read an article that completely ticked me off. It was one of those “be a pack leader” articles riddled with outdated advice.

The piece suggested that herding was a sign of alpha dog behavior, or a sign that your dog was trying to dominate you.

However, these dogs are doing what they were originally bred to do! Herding is hardwired into their code.

Teaching your dog proper bite inhibition will go a long way towards letting him do his job without causing pain.

Now that we know WHY German Shepherd puppies bite so much, let’s talk about how to stop it.

Related: How do I train my dog not to mouth me when he is playing too rough?

How to Get Your German Shepherd to Stop Biting

These tips apply to all puppies but we’re focusing on the GSD for a couple of reasons.

First, as I mentioned earlier, they tend to be really “bitey” dogs for all of the reasons above.

Second- and this is crucial- German Shepherd puppies grow up to become very powerful dogs.

While there is a lot of confusion regarding “bite force,” most sources put the GSD in the #2 strongest slot.

FYI, their bite is stronger than that of a pit bull. It’s also important to note that the GSD didn’t “win” by much.

Still, that bite force combined with his instinctual urge to both guard and herd means he can do some real damage if he’s not properly trained.

Which brings us to: how to get a German Shepherd to stop biting while teething!

FYI: these tips include affiliate links for recommended products. If you make a purchase through these links, we earn a small commission.

Since pain is one of the main reasons teething puppies bite, soothing that ache can go a long way towards teaching him to stop biting you.

Rubber chew toys like Nylabone work great, especially when you freeze them.

While some herbal remedies can also soothe pain, I feel like you really need to talk to your vet before administering them.

2. Give him alternatives to your hand

Since you puppy wants to use his mouth to explore, give him plenty of opportunities to do so using “safe to bite” things!

Stock up on a nice range of toys & chews with different textures (see list below for recommendations).

Then, the moment he starts getting rough during playtime, substitute your hand with a toy. 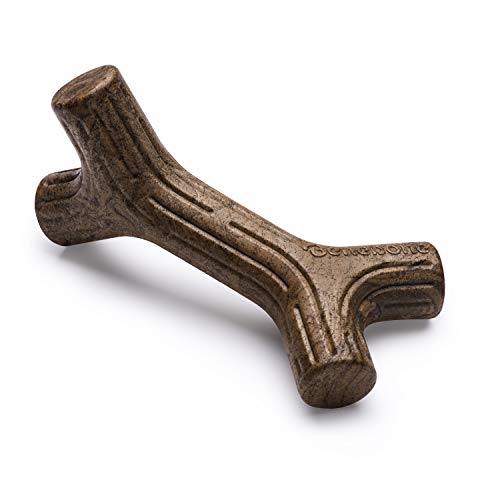 Benebone Maplestick Durable Dog Chew Toy for Aggressive Chewers, Real Maplewood, Made in USA, Small
USA MADE – We make and source everything in the USA.
$10.62

It sounds overly simplistic, but you’d be surprised at how well it works.

Your puppy may already know how hard he can bite his siblings but now he needs to learn just how much YOU can take.

If you’ve heard in the past that you should yelp like a puppy when your dog bites to hard, put that out of your head right now.

While this may work for some dogs, it’s generally not recommended because it can actually make your dog more likely to bite you.

Why? Because you’re not a puppy. Your version of a yelp sounds nothing like a dog.

You know what it does sound like? A fun squeaky toy!

What does your dog do when he finds the squeaker in a toy? He bites down on it like crazy!

Quit the yelping! Instead, just put your puppy down and walk away. Teach him that the fun ends when he gets too rough.

This is exactly the same thing that his mama did when he bit too hard while nursing, and what his siblings did when they got tired of his rough bites.

Socializing your puppy is an all-around good idea that can also help him learn better bite inhibition.

It’s not enough to just expose him to other dogs, though.

Since German Shepherds have such a strong guarding instinct, you’ll also want to make sure he’s used to other people as well.

Puppy classes are great because the socialize as well as teach the basics.

If you can’t afford them, though, take him to the dog park, on outings to PetSmart, and pretty much anyplace else where he can meet other dogs and people.

5. Know when to call in a professional

While aggression has nothing to do with most cases of German Shepherd puppy biting, there are always exceptions.

If your puppy’s bites are accompanied by snarls, lunging, snapping, or other signs of aggression, definitely call in a professional trainer.

No matter what the cause is, teaching your German Shepherd to stop biting when he’s still a puppy is absolutely crucial.

If you follow these tips, he should stop biting you well before those big teeth come in!

Do you have experience teaching your puppy to stop biting? Share below!