Are you looking for some Dachshund aggression training tips and strategies?

Dachshunds might be small and cute, but they’ve got quite the temper.

Fortunately, I’ve got 9 mind-blowing tips on how to manage your aggressive Dachshund.

You may also like: How to Train Aggressive Dogs

When I say “aggressive dogs,” Dachshunds will probably be the last breed to come to your mind.

Thanks to their comical appearance, a lot of people have the wrong impression about Dachshunds.

However, Dachshunds were bred to fight badgers, so they have more spunk than you’d expect from such an adorable dog.

So, they need as much training and socialization as other aggressive breeds.

As such, it’s no surprise that your Dachshund might have some aggressive tendencies.

Fortunately, you can correct such behavior with enough patience, time, and these 9 helpful tips.

Your first step in dealing with your Dachshund aggressiveness is to learn the warning signs.

Dogs rarely attack without issuing a warning that owners fail to recognize. I’m talking about:

These are the classical signs of aggression, and if you don’t remove your Dachshund from the situation, they might resort to biting or attacking.

Avoiding eye contact, holding the ears back, or trying to move away are also warning signs that your Dachshund is uncomfortable.

Dogs don’t get aggressive out of the blue. Usually, there’s something that provokes the behavior.

Your job is to find these triggers so that you can apply the right training strategy.

The most common factors that can make your Dachshund aggressive are:

Note when your Dachshund gets aggressive and towards who – animals or people.

Then look at the surrounds and observe if something might be scarring your Dachshunds.

You’re looking for a pattern to help you narrow down the cause for aggression.

Since Dachshunds are naturally suspicious of strangers and might not get on well with other pets, early socialization is vital.

Going to the park, inviting people over, or puppy obedience school are excellent ways to socialize your Dachshund.

You might even organize your Dachshund puppy a socialization party!

The most important thing is to expose your Dachshund to as many different people and pets as possible.

Don’t force your Dachshund to interact with other people/pets if they seem uncomfortable or scared.

Make small steps and use a lot of positive reinforcement to get your Dachshund used to strangers/other dogs.

Once you’ve determined your Dachshund’s aggressive triggers, you have two options – avoid or desensitize.

Avoid means that you try not to put your Dachshunds in situations that might trigger their aggression.

For example, you avoid other dogs on walks or block the window view if your Dachshund is aggressive towards the mailman.

Desensitizing means that you will condition your Dachshund to connect their trigger with positive things so that they’re not aggressive to it anymore:

Since Dachshunds love to eat, they’ll quickly understand that being non-aggressive equals tasty food. Just be careful not to overfeed them since Dachshunds are prone to weight gain.

#5 Be a Strong Leader

Another important aspect of Dachshund’s aggressive training is to establish your position as a strong leader.

While dogs may no longer be considered pack animals, good leadership is still a vital part of dog ownership.

Despite their size, Dachshunds have dominant tendencies and can be bossy.

So, you have to show your Dachshund that you’re the leader and they’re the follower.

Make your Dachshund obey a command before you give them food, attention, or toys.

Always lead the way during walks and don’t allow your Dachshund to pull you around.

Set your rules and make them clear to your Dachshund from the moment you bring them home.

Enforce them strictly, or your Dachshund will exploit any loopholes. 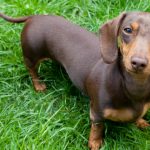 Puppies bite and Dachshund are no exception. However, if you teach them bite inhibition early, it’s not going to be a problem in the future.

Whenever your Dachshund bites, you should give a loud yelp and ignore them for a couple of minutes.

That’s what puppies do when one sibling plays rougher than the others.

It teaches your Dachshund that they have to be gentle or the fun ends. Specialists call it bite inhibition.

To drive the point that biting is bad, you might give your Dachshund some me-time in their crate or playpen after they nib you.

It might take some time for your Dachshund to realize that they’re being “banished,” but they’ll get it when you don’t pay any attention.

For this technique to work, you have to be consistent. You have to react the same way to your Dachshund biting and have the rest of the family follow suit.

Obedience training is necessary for all dogs and twice as important when you have an aggressive Dachshund. It can help control your Dachshund when they start acting out.

So, start obedience training as soon as you bring your Dachshund puppy home.

Plan short sessions throughout the day and have your Dachshund master one command at a time.

Always end on a positive note, and don’t forget to use a lot of positive reinforcement.

Remember that obedience training should fun for your Dachshund. These dogs get bored easily and don’t like to repeat the same command over and over again.

You can also enroll your Dachshund in an obedience school.

However, these can be expensive and out of your budget.

In these cases, you can save some money from dog training bills by watching YouTube videos or renting dog training books from the library.

If your Dachshund is suddenly aggressive, it’s time for you to visit your vet.

The same goes if your older Dachshund is being aggressive

Pain or injury can make even the mellowest dogs aggressive.

Your Dachshund can’t tell you that they’re hurting and growling, snapping, or snarling might be their only way to show you that something is wrong.

Keep in mind that Dachshunds often have problems with their back and that they shouldn’t jump from high places.

#9 Learn the Proper Way to Discipline Your Dachshund

Never try to discipline your Dachshund physically. That’s one of the don’ts of dog training.

Having your dog fear you, it’s not how you deal with aggression. It will make your Dachshund fearful, shy, and more aggressive.

You’ll lose their respect and your position as the leader of the pack.

So, how should you discipline a Dachshund? You use a firm “No!” when you see your Dachshund misbehaving.

Don’t reward bad behavior with attention and always reward behaviors you want your dog to repeat. Be patient, calm, and fair.

Dachshunds might be cute, funny, and lively, but they have a big dog personality and can be dominant and aggressive.

So, it’s essential to socialize your Dachshund early and start obedience training as soon as possible.

You might also speak to your vet about spaying/neutering your Dachshund.

While fixing your dog won’t solve the aggression problem completely, it will lessen it.